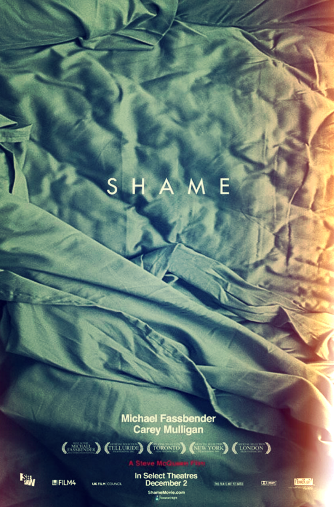 We are introduced to Brandon against the backdrop of a grimy New York subway. Assiduously dressed in fitted coat and cravat-styled scarf, he's incongruous to the dirt smeared windows; a contrast to the sloven homeless man slumped in the opposite seat. His shame - inevitably reviled by society - is worn openly. Here we have just one example of the enduring irony employed in Shame. Brandon's shame is private and tortuous. Shots of Brandon staring lingeringly up at exhibitionist couples through windows emphasises Brandon's isolation. He alone seems to be incapable of wearing their deviations openly.

The audience is granted an intimate look into Brandon's perversions. Whilst this is uncomfortable for the subject matter at hand, the irony is again evident when played against scenes with a co-worker who Brandon develops 'real' feelings for. Connecting on an emotional level creates a mental and physical block, making Brandon a figure of pity and hopelessness. Shutting the world out on any meaningful level, the audience are the only ones privy to Brandon's personal life.

It's unsettling to see how ordered and meticulous he is in his daily life. Ritualistic to a tee, the arrival of emotionally erratic Sissy (Carey Mulligan) threatens Brandon's grip on what he can control. Although never elaborated on, instead relegated to an invisible storyline for the audience to ruminate on, Brandon and Sissy are incapable of engaging in functional relationships. At the heart of this seems to be an inappropriate 'anti-bond', leaning towards incestuous undertones. The siblings are brutally exposed to one another, both physically and emotionally.

Sissy is damaged. Whether due to dysfunctional relationships of her own (scenes of Sissy pleading on the phone to an ex-lover are sad and pathos-like), she clings desperately to Brandon for scraps of affection. She is above all, vulnerable and despite her own distasteful behaviour, Shame depicts her as almost innocent and childlike. Shrouded in thin white material or in a glitzy ballgown singing a bluesy version of New York New York (in the films most gorgeous scene), Sissy seems to be the only character to appreciate hers and her brother's issues of misplaced intimacy. "We're not bad people. We just come from a bad place."

Shame is raw and brutal in exposing Brandon for his addiction. Whereas much of the film is muted in its colour pallete, emphasising the isolated world Brandon inhabits, colours are suddenly abundant and vibrant when Brandon succumbs or indulges in his addiction. The soundtrack is melancholic but hopeful and with the film's ambiguous open ending lending to audience speculation, that is all Brandon is left with. The possibility of rehabilitation.

Steve McQueen and Abi Morgan (both past collaborators with Fassbender - see Hunger and Fish Tank respectively) have created a brave, nonjudgmental portrait of a man isolated for an addiction many would look upon as perverse. Unflinching and unapologetic, Fassbender is on form in his portrayal of Brandon. The nuances of his personality - charismatic, suavely flirtatious, tortured for his impulsions - are perfectly executed, without a hint of melodrama and as composed as his character crafts himself to be.
Posted by Unknown at 05:27

Email ThisBlogThis!Share to TwitterShare to FacebookShare to Pinterest
Labels: film